If you were wondering what hacking is all about, you will find your answer at Finowfurt Airbase, close to Berlin. Here, at the ‘Hackers in Space’ camp, thousands of ‘hackers and associated life forms’ are exchanging their technical, social and political ideas and having a splendid time while doing so. Bits of Freedom enjoys everything about the festival. Here is our first report.

The ‘Hackers in Space’ camp is organised by our German friends and fellow EDRi-members of the Chaos Communication Club. Bringing together about 3.500 hackers from all around the world at a ravingly cool air base crammed with antique Russian jets and helicopters, it is the largest festival of its kind in Europe. The summer camp takes place every four years, alongside the annual winter conference in central Berlin (our report).

The mainframe of the festival is its program of lectures, taking place in two pretty fancy lecture rooms: 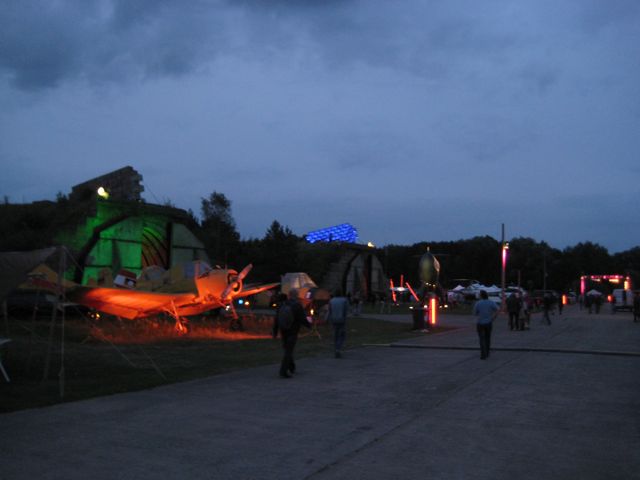 And outside these hangars, there are spontaneous gatherings of like-minded people experimenting with technology, imagining the information policy of the future and having a go at retro gaming consoles or self-made Geiger counters. These people actually build and make possible our information society, your internet, your smartphone.

But ‘hacking’ is about much more than computers: it is about technology in its broadest sense. Repairing your chair with a simple string. Inventing a new method of cooking your eggs. Thinking of new applications for your empty bottles. Everyone has a hacker inside of him.

At the opening of the conference, the organisers dreamed of this community putting a hacker in space orbit in the next twenty years. Unrealistic as this may seem – someone in the crowd shouted ‘will it be a one way ticket?’ – try to think where we were twenty years ago.

The next lecture we attended was on OpenLeaks, a spin-off of WikiLeaks. Earlier today, we blogged about the lecture (in Dutch). And in the evening, Rop Gonggrijp and Frank Rieger on ‘Transition Telecom’ presented a gloomy view of times to come – and a solution. Their prediction is a turbulent world, in which we start wars in search of resources, our states emerge as police states, we get much more dependent on both scarce resources in our local communities on the one hand, and the help of the people we trust on the other.

The way out of this mess, is designing our societies to be resilient, both concerning resources and technology. In particular, they pointed to the importance of mesh networking – such as provided by the Freedom Box. Perhaps, we all shouldn’t devote our precious time to launching someone into space, but solve our problems back here instead?

We took a plunge in this vibrant contemporary culture (even though many might call it ‘futuristic’). We wonder, what the ‘Hackers in Space’ camp will bring us tomorrow, and what we can give back to this vibrant and fascinating place. Follow our blog and @bitsoffreedom to find out.